I’d never been to Yeoville, really been to Yeoville until the class trip today. Having driven past the area on my way to another a number of times, I was safe in my many stereotypes of the area. Stereotypes which included that It was a run-down part of Johannesburg, filled with immigrants who were drug dealers and criminals. I was blissfully unaware of Yeoville’s richness and in all honesty it was of no interest to me.

Yeoville is a place of true culture and authenticity, certainly more than I have been exposed to in a long time. Authenticity might seem as an inappropriate word considering that it is place that people from all over Africa (and in other instances other places from the world) take refuge and create new lives which I assume are not always better than those they lived back in their home country. Anyway I use the word authenticity because Yeoville encompasses an extraordinary amount of tradition and richness and beauty- both in the historic sense as well as in the modern.

I was immersed in the beauty and the diversity of it all and the entire time I was there I felt like my living in this generation was just criminal. I imagined the great life that I could have lived had I been born in Yeoville’s glory days and aged with it, into what it has become today.

The people were friendly and many smiled with a tinge of curiosity and what I assume to be some excitement when we walked past. Their warm reception of an ignorant young woman was all the confirmation I needed to know that this in-depth journey, the final stretch in my quest to become a journalist, was going to be a great experience.

TRUE BEAUTY: One cannot help but stop and apprectiate the beauty that is Johannesburg. This from a hilltop near the water reservoirs in Yeoville. Photo: Bongiwe Tutu 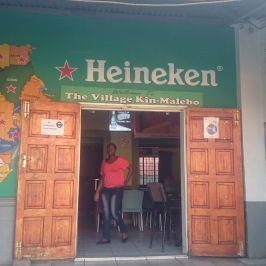 GETTING CULTURED: At the end of a wonderful tour we were taken to this restaurant which sells authentically Congolese food. It took a while to make a decision on what I was going to eat because many of the foods were new to me and they were certainly going to be a new experience for my pallet. That’s all I have to say about that, as Forest Gump would say. Photo: Rofhiwa Madzena